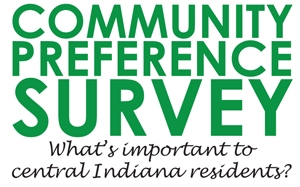 INDIANAPOLIS — The Metropolitan Indianapolis Board of REALTORS® (MIBOR) and the Metropolitan Planning Organization (MPO) released the results of a region-wide Community Preference Survey today that reveals the factors central Indiana residents consider most important when making their housing decisions, what their future aspirations are related to housing and how satisfied they are with their communities and overall quality of life.

The results reveal that while central Indiana residents are happier than the average American with their quality of life, fewer than half of all residents are living in their preferred type of community.

“The findings of the Community Preference Survey have the potential to serve as guides for community planning as we look to the future growth and expansion of our region,” said Steve Sullivan, MIBOR CEO. “The goal is to retain, and build upon, a high level of satisfaction while positioning ourselves as a region that grows in ways that attract and retain residents.”

The survey’s key findings are:

Far and away, the safety of the community and level of crime are the most important considerations for central Indiana residents when deciding where to live. When given a list of attributes to rank, respondents ranked safety, schools and affordability as their top three.

“It’s impossible to separate transportation investments from their land use impacts,” said Northup. “As central Indiana’s regional transportation planning body, the Metropolitan Planning Organization directs millions of dollars each year toward road, bridge, trail, highway and transit projects, and it’s critical that we understand the broader impacts of those investments on real estate and, specifically, on local housing markets.”

The results are based on responses given by 1,502 central Indiana residents in 10 counties who were surveyed by phone in in December 2012. Counties were sampled to be proportionally representative of the region as a whole, with an oversampling in smaller counties to ensure sufficient representation. Results were weighted against figures from the 2010 Decennial Census to ensure proportional representation with respect to county, age, income and gender.